An attack surface is any physical or digital asset of your organization that runs the risk of falling prey to a cyber attack.

This includes but is not limited to: employees, data centers, networks, systems, and other connected elements. As a company grows, inevitably, so does its attack surface.

More often than not, mushrooming of a company’s networks generates blind spots in all its connected assets. This begs the need to deploy enhanced preventative systems that shield the growing assets and ensure safe expansion.

What Is Threat Exposure Management

Threat Exposure Management is the proactive identification, evaluation, monitoring, and mitigation of vulnerabilities and security flaws across an organization’s attack surface.

Threat Exposure Management aims to safeguard an organization’s critical assets, networks, systems, and other elements from looming internal and external threats while minimizing the attack surface. It is driven by four core components.

Identifying risks and vulnerabilities through rigorous security assessments, threat intelligence, and other techniques.

Deploying policies, regulations, and countermeasures to minimize the likelihood of any emerging vulnerabilities.

Continuously monitoring the infrastructure for any unwanted changes or new-found loopholes that threaten the company’s security.

A general Vulnerability Management System (VMS), albeit it reports vulnerabilities, is not competent in proactively securing the environment and mitigating threats.

While your VMS points at the fractures in your defenses and you find yourself buried under alerts, spending away precious time assessing which threat to remediate first and having to rely on playing hope-chess that your business will not fall into the crosshair of adversaries.

By contrast, adopting Threat Exposure Management in your organization’s overall security model would be the recommended solution for active protection and security maintenance of assets.

Threat Exposure Management integrates all the functionalities of a VMS through Risk Identification and Assessment to hunt and patch vulnerabilities and secure potentially exploitable vectors.

Additionally, with Risk Monitoring and Mitigation being a core component, a TEM system keeps up with the pace of asset expansion by persistently monitoring the infrastructure for any unwanted change and mitigating newly-formed loopholes that threaten the company’s security stature.

As a result, the number of susceptible endpoints is reduced, effectively downsizing your company’s overall attack surface.

Why You Should Adopt Threat Exposure Management

Any company, irrespective of scale, should be on the lookout for evolving defense technologies that meet the security needs of its growing infrastructure. It is the only logical move to make, given the surge of ransomware attacks, data breaches, and cyber attacks in recent times.

Statistical reports depict a sharp rise in malicious activity and attacks against SMBs and large enterprises alike. Ransomware hits have become 57x more common now than they used to be in the last five years.

A staggering 75% of companies in the US reported falling victim to phishing attacks, and on a global scale, phishing cost an estimated 1.8 billion in business losses. Cybercrime is projected to cost $10.5 trillion per year by the end of 2025.

Cyberattacks aren’t limited to just companies, as even nation-states such as Kenya and Costa Rica have been held hostage by targeted ransomware attacks.

This data should serve as a wake-up call for companies to steadfastly adopt modern security solutions that are competent to stand up to the growingly aggressive threat actors who will jump the gun at any given time.

Timely investment in security can save your company from potential bankruptcy due to malware or data breaches. 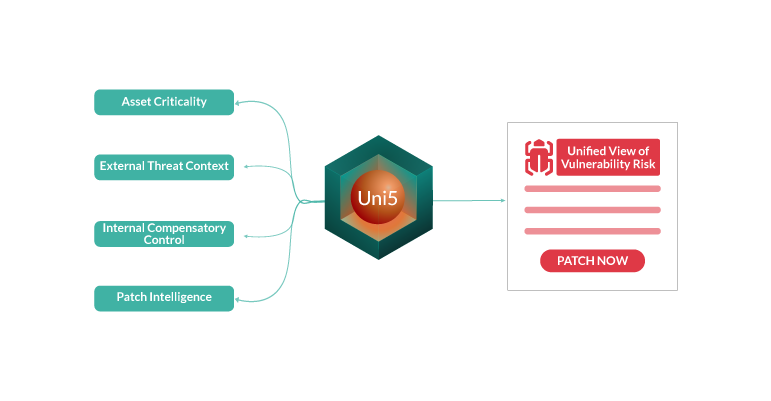 HivePro Uni5 focuses on Threat and Exposure Management by using vulnerability as a pivot to assist customers to reduce the attack surface and move away from trying to “fix everything” to fix “what matters”.

HivePro Uni5 provides a true risk score for every vulnerability based on 20+ parameters such as Threat Actor Landscape, Industry Vertical, Geolocation, wormability, exploitability to name a few. This enables enterprises to take decisions on what to Patch Now and what can be Scheduled to Patch Later. To know more about HivePro Uni5, feel free to reach out to us.